As I'm doing the Wicklow 200 next weekend (although I'm now leaning more towards the 100), I thought it would be a good idea to actually do some training that involved a bit more climbing than riding up Bridge street twice a day.

Avoiding the booze on Saturday night, I managed to get a good kip and rise early enough to get a good run at the day. It's been a while since I've gone out on the road in the mountains, but the route came back pretty quickly: Out through Templeogue to Stocking Lane where the road begins to climb. I found myself running through my gears at a rapid rate and soon had nowhere to hide and had to grind my way past the Hellfire club and Massey's Wood on my way to the viewing point. 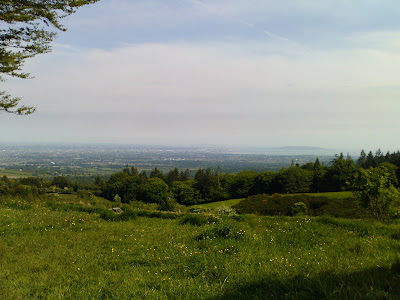 By the time I reached the viewing point my heart rate was off the scale and I was having serious doubts about my fitness. I took a few minutes to savour the unparralelled view of Dublin, it actually looks pretty from up there, took a few more swigs of water, sucked it up and forced myself to continue climbing. Thankfully the gradient was a bit less punishing from here and I was able to cruise for a while and get my legs back. 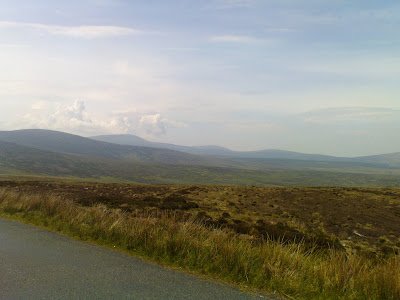 Over the Sally Gap and on towards Kippure, and here my sense of direction got very fuzzy. There may be only one road, but I had no idea where it led... a quick phone call to Chris had me on my way to the crossroads past Kippure where I had to make the decision... right towards Blessington, left to Roundwood or straight to Glendalough. I went for the middle ground, distance-wise, and headed towards Roundwood. 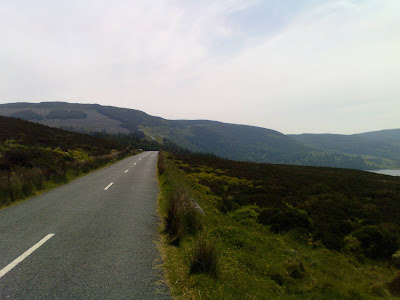 Lots of downhill here but up ahead I could see what looked like some punishing climbing. At this stage my legs were feeling good and I was looking forward to the challenge. Thankfully the gradient was deceiving and I managed to climb prettty comfortably to a stunning view of the lake by Lugalla, really just an exceptionally beautiful place. What goes up must come down... this was the steepest descent yet, nearly all the way into Roundwood. My new computer showed a max of 64.2km/h coming down here... that was fucking scary, but of course exhilarating. The only problem was I was going to have to climb back up here later... 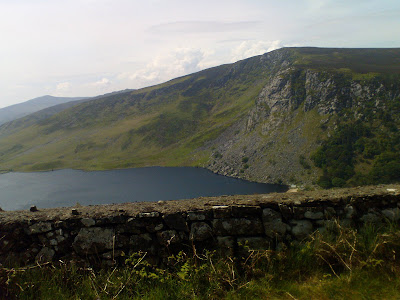 Roundwood provided me with a bench and some much needed sustenance. Rather than taking the ugly route back through kilmacanogue and civilisation I felt I had the legs to head back uphill and tackle my route in reverse. Hitting that climb in reverse really nearly killed me, I was pleading with my bike for a few extra gears, but there were none to be had, of course this only added to the sense of satisfaction when I made it to the top. 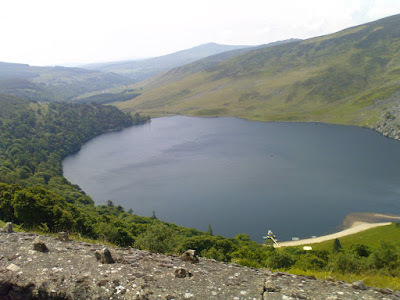 Another quick breather and I headed for the next descent. Confident from my high speed descent earlier I blasted down, this time though I hit a small stone in the middle of the road, at 55km/h! Back tyre blew out but thankfully the front held and I was able to stop without too much drama. Being the experienced tube-changer I am I quickly managed to break the vale in my one spare tube... and had no patches with me... uh-oh.

I had called in the cavalry and press ganged Dotc into rescuing me, rather disappointingly a couple of roadies cruised by without so much as a sideward glance, but then a saint in a caravan stopped and came to my aid. He had a hybrid in his car and happily gave me the tube from his front wheel to keep me rolling. That just made my day! The guy would accept no money for the tube and was just glad he was able to help. There are some good people left in this world.

With a light heart and 2 fully inflated tyres I set off with a renewed sense of purpose: I had to give it my all now to justify that act of kindness, as if by pushing myself that little bit harder i was somehow showing my gratitude from a distance. I don't really remember much of the return journey, I just put my head down and pushed all the way home.

It's such a disappointment to ride back into Dublin, to reacquaint yourself with traffic lights and tailbacks. Quite depressing actually, I just wanted to turn around and climb back into the wild, peaceful beauty I'd come from. But I really needed a coffee, so I thought better of it and went home.

The reason I'm writing about a small journey(75km) that many people will have done countless times, is that I personally had forgotten how much beauty we have access to on 2 wheels so close to Dublin. The simple joy of cresting a hill and having the landscape unfold beneath you is something I don't think I will ever tire of, and doing it under your own steam makes it all the more rewarding. Far more rewarding than riding up Bridge Street twice a day.
Posted by messedup at 7:22 PM

2 tubes in future! Nice story though, roadies are usually pretty friendly, surprised at that myself. See you Sunday bright and early.

Well, to be fair to the roadies they were climbing up the hill i was coming down... they had the glazed, pained expression of those that didn't really have enough oxygen in their lungs to ask if I was ok, and the climb was steep enough that you would have a hard time getting started again if you stopped.
Most roadies I met along the way were perfectly civil, it's great the way everyone is more courteous as soon as they leave the city behind.
Looking forward to Sunday!
(above post deleted by me because I misspelt courteous!)

Do the 200! Go on! The 100 is a freakin doddle compared to the 200. You'll miss out on all the high-fives and war stories at the end. Seriously, the 200 is tough but great fun (when you're finished obviously)

thats real nice. im moving back in august from boston and am really looking forward to doing that ride amongst others