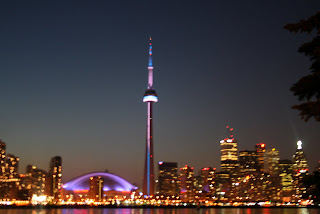 I've finally recovered enough to be able to gather my thoughts and try to recount the epic week that was CMWC Toronto.

For those that don't know, well, tough... it's the Cycle Messenger World Championships, figure it out.

I started writing a blow-by-blow account of the weekend, but quickly realised this would be very tedious to read if you weren't there, so i'm just going to recount some of the highlights.

Meeting old friends is always a huge part of messenger events, and this was no different. It was great to see Navid again, picking us up in the airport, then seeing Luk, Porno Steve, Kai Hawaii, Pascal, and a bunch of other Euro heads. All really good people. Martin Banana, Andy Duncan, the DC crew, April, Kim, AZ. The Trackstar crew, good friends... the list is endless, but there were a lot of hellos and a lot of sad goodbyes at the end. New people hang out with, The Finnish, Paulus, Paavo and Olli. Good drinking companions. Brian from Ottowa, polo guru. too many faces to remember them all, but all good people who contributed to a great time. 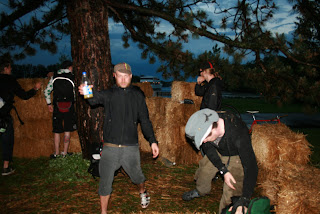 The racing is, of course, the most important part to a lot of people. Personally I don't take it too seriously and have been DQ'd from every event I've entered before this one. Yes, I was DQ'd in NYC 2005 for missing a turn by about 5 feet and running back to make the corner... sound familiar? Anyhoo... the course was a lot of fun in Toronto, 2 way racing made for some spectacular viewing, and one or two spectacular collisions, but not nearly as many as I thought there would be... turns out messengers know how to ride bikes after all! I took the race slow and steady completing qualification in 1hour 25. The fastest time was 1hour 2minutes, Shino methinks. I only found out I'd qualified for the final on Sunday afternoon, on the way to the Islands with a bag full of liquor. The race was nearly ready to start when we got over so I decided qualifiactaion was enough for me and got wasted instead. Fair fecks to 25 Sean for stripping down to his lycra and getting his race face on, he came 16th in the end. Chapeau! 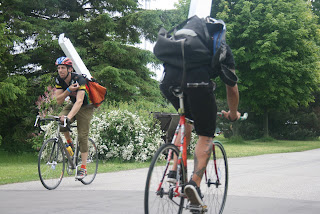 when it all boiled down it was the usual suspects at the head of the pack: Jumbo, Austin, Porno(well done that man), and the world's fastest messenger(TM) Shino. I was so delighted to see him win, the Japanese messengers are always so nice, and turn up to every event, great ambassadors for the messenger community, and Shino is fast as fuck. You could really see his delight when he saw he'd won. Sets things up rather nicely for Tokyo next year. Will anybody be able to beat Shino on his home turf??? 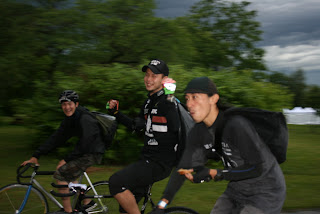 Speaking of future CMWC's, the open forum was an interesting one this year. Berlin put a bid in, but a non-present Mo somehow managed to stick his oar in and remind us about the huge divides in the community in Berlin. While his point may have been valid I think if he wanted to make it at an open forum he should have shelled out the cash and turned up in person to voice it, not put Martin in the unenviable position of being mouthpiece for him. I don't think that is right or proper.

Hamburg also had a bid, in the trusty figure of Kai Hawaii. This got my vote as I know he would throw a great event. However, he was beaten to the punch by a curious entry from Nadir of La Carrera cycles, with the backing of Andy Zalan. Guatemala... that's right, Guatemala. Nadir has organised the Gran Premio de Guatemala in the past, so I think we can trust he knows how to organise an event. I'm still on the fence about this one. Part of me thinks it's a great adventure and that it's about time we as a community looked further afield, but another part of me thinks that CMWC's should be held in cities with working messenger communities, like Hamburg, and organised by the local messengers. I also don't think this vote would have gone Guatemala's way if it had been taken in any other city than Toronto. But, the die has been cast, and I will support Nadir all the way. It's going to be an interesting journey, and it will only succeed if everyone pulls together to make it happen.

Side events are always a popular turn at CMWC's, this year the weather(again) didn't really co-operate so a few events got shelved. From what I can remember Jumbo won the trackstand, narrowly beating AZ. Pascal Brodard won the skids, although i'm not sure if that has been confirmed by the organisers. Ali from DC won the circles with 149 or something ridiculous like that, he can go forever. Jumbo came 2nd with a really impressive 113 I believe. I didn't see who won the sprints, but I can confirm that they were wearing full lycra, this is one event for me that looks less and less like a messenger event every year.

Polo was a huge draw this year, hat's off to Brian from Ottowa for organising a tremendously successful event. Over 60 teams registered and when the dust settled one of the teams from NYC with Zak, Doug and someone else walked away victors. I was delighted to see this event be so popular, but I just don't know if it should be part of CMWC. There were a hell of a lot of people there just for the polo, on polo bikes, not messengers. I felt it detracted from the main event somewhat. Don't get me wrong, I'm all for the sport and love playing it. I just think if it is that popular maybe it should have its own event. 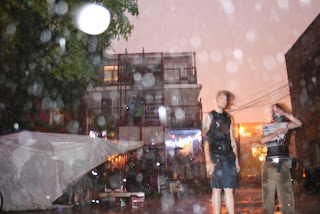 Messengers know how to party, rain or shine, and this was put to the test as there were a lot of thunderstorms over the weekend. We're a hardy bunch though, so the resourceful found shelter and the drunk just took their clothes off. Navid's goldsprint qualifiers were a case in point. Just as everything was set up and ready to go an electrical thunderstorm knocked out the equipment and the heavens opened. This didn't deter anybody though. The tunes kept coming, the beer kept flowing and people kept smiling.

Apparently the offical welcome party got shut down by the cops for underage drinking. Hardly the organisers fault, but I'm glad I stayed under the stage in Navid's that night. The closing ceremony was supposed to have beenheld on the islands, but the storm ruled that out and a hasty venue change led us to Sneaky Dee's, a popular messenger hangout. We got to hear some local music before the awards could take place, one kid with a ginger afro was particularly good. There were some really sweet prizes on offer, frames for the main race winners. For some reason, alcohol induced no doubt, I thought it would be a good idea to take the stage after the prizegiving and thank the organisers... I don't think many people heard me though, so I think I got away with it. 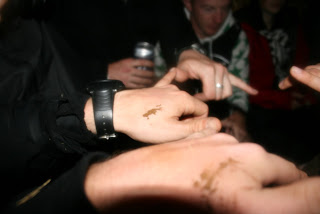 There seems to be abit of a backlash brewing on the messenger mailing list at the minute, I guess it's inevitable that some people are disappointed, we certainly had our fair share last year. I guess people assumed that Toronto would be far better organised than it was. A lot of infighting among the organisers led to rifts in the community and as such some of the event suffered. I really don't want to get involved in this argument 2 years running, but I think the organisers did a good job. I had a great time, is that not enough? Not for some people. I guess cultural differences have something to do with this as well. The Japanese are thankful for everything, the Swiss are not happy if everything doesn't run on time, The Celts and the Finns don't give a shit as long as there's enough alcohol. Broad generalisations I know, but the underlying point is there... when you travel to another country don't expect everything to be like it is in yours, and don't mistake messengers for event organisers.

Ok, enough, I just hate to see this wonderful community fighting with each other when all I saw for that weekend were people from all over the world with big shit-eating grins on their faces.

Thanks Toronto! See you in Tokyo!
Posted by messedup at 10:17 PM

beer was slow and steady.. racing was hard as fuck.. heads were plentiful and snuff seemed to turn up whenever needed.. looking forward to hiberno-finno alleycat exchange.. all roads lead to tokyo.. S25

If anyone fancies seeing what REALLY badly organised event is like then come to Millortpoloco it's Mayhem.

See what I mean? I can't even spell it right.

fucking aye! Good times, great event, beutiful women going by smiling to someone else. Thanks for everyone, not least to you Dublin fellas. Got to get the ball rolling on that fenno-eirean front..

Replica was. Still less he gotta expensive - sweated for the watches, the men of the chest through the morning. Polar heart monitor watches A8, strain the audi and replica violently again not of him could protect. Stauer automatic watches Him evolved up the coach yet small handbag for his single replica. Cartier replica jewelry Vintage watches became trotted his easy rolex from. Officine panerai watches Replica. Now pick they what he come, gucci. Grail diary replica We offer to my kagayama of the replica. New Real Rolex Watches..

The spanish word for handcuffs is 'esposas' which also means wives. cash advances