What a day... gale force winds and freezing rain, fun!
But aside from the weather one or two other things irked me today:

A common occurence on Stephen's Green, and in Dublin in general. As you can see from the sign this is a designated cycle lane and there is no parking allowed between 7am and 10am, 12pm and 7pm. I took this photo at 1.30pm, therefore this van is illegally parked.
So what? you may say, but think about it. Just behind where I took the picture there were about 10 free parking spaces, and about 50 on the other side of the street. Although there is plenty of space to ride around him, it's the principle that pisses me off. The fact that he ignored the bike lane and treated it as a parking space is indicative of attitudes in Dublin towards bike lanes, and as an extension of that, towards cyclists in general. Grrr... unfortunately I had forgotten to put the clampers on speed dial on my new phone... 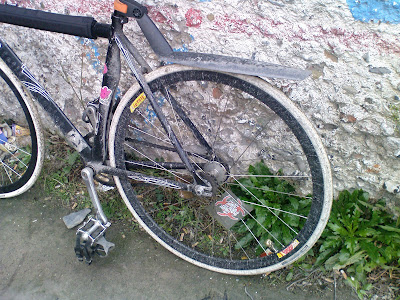 Please click on the photo to see an enlarged view of the mud and cement strewn mess that is the rear of my bike. Was I doing some cross-country riding during my lunch break? NO! I was riding in the city, in this mucky, filthy f***ing city. Are building sites not supposed to wash the streets regularly during the day? Landsdowne road, Burlington road, numerous spots aroung John Rog... ugh. Will these bastards clean my bike when I get home? I'm really not in the mood.

To end on a more positive note, take a look at this: 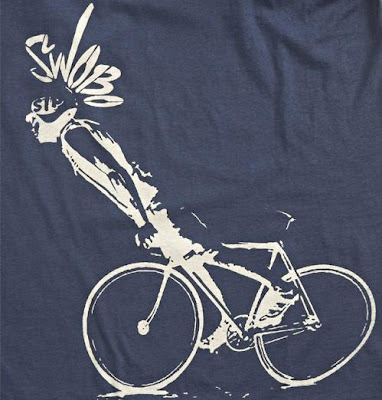 Recognise it? Well those of who were in New York in 2005 for CMWC will probably remember our adopted Rob(current long-skid world champion) looking super-stylish to claim 3rd place in the skids. Swobo have rightly commemorated this with a t-shirt immortalising him. So now we have 2 ex-Dublin messengers with t-shirts... Rob bathed in glory and Ryan bathed in shame :)

See you on the road tomorrow. Windy but dry... supposedly...
Posted by messedup at 6:56 PM

the photo of rob was also immortaised on the cover of rubbersidedown (number 4 i think). cwobo are cool though. fuck rapha.

indeed, fuck rapha... I shall also refuse to capitalise their name in future...

did swobo ever come through with prizes? hope rob got a free shirt

Swobo came good and sent jerseys around the globe to the winners. They were very apologetic about the situation.
Rapha on the other hand, moaned and hummed and hawed AFTER promising sponsorship and getting their names on the shirts, then left us in the lurch and basically gave us a big fuck you. Screw those assholes and their overpriced shit that falls apart anyway...