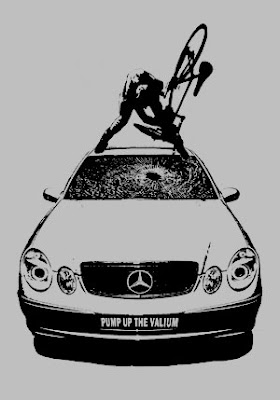 Many of you out there will remember Canadian Ryan from when he worked here in Dublin, or may have met him during CMWC. He's a great guy, a big character, and an asset to the community. Turns out he's also daft as a brush...

In an outburst of messenger madness he put his bike through the windscreen of a Mercedes that was hassling him. Apparently a heated exchange led to the driver deliberately running into the back of Ryan, which led to him smashing the cock's windscreen. You know you've all wanted to do it at some point.

Problem is he didn't make a getaway... and has been landed with a £1,000 bill for criminal damage. If he doesn't pay this he will get turfed out of the country. I'm sure nobody wants that to happen.

The wonderful lads at House of Pistard have made some t-shirts to commemorate the incident and are giving 100% of the profits to the cause. Check out their page here and contribute to help save the guy.

i love you ryan, but get a fucking grip mate!!!