Ola Muchachos,
after much booze, beach and bikes, this year Paradise Weekend drew to a close. A typically great affair. The weather was lovely, the people were great, and the racing was fun. 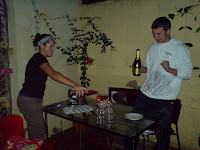 Friday night saw the opening alleycat organised by Dave, an American working in Barca. A short, sharp checkpoint to checkpoint race, for those that went in the right direction. Unfortunately myself and 55 Eoin decided we were much smarter than the other 40 riders and rode off in the opposite direction...

Thankfully we got turned around after a few blocks and eventually found ourselves at checkpoint one, where Kai was working on a puncture. In typically chivalrous fashion we decided we'd stick with him till the end of the race... if we could. On the way to the next checkpoint Kai decided to skitch from a pretty beat-up old car, but it looked perfect as it had handles on the bumper! About 10 seconds into this ill-fated decision the bumper just pulls clean off in Kai's hand! He lets go and it manages to hang precariously from the car. I nearly crashed I was laughing so hard, and the guy in the car had no idea!

From here on in it was relatively straightforward. We would check the map, ride way further than we were meant to, check the map again and try and work our way back. When we thought we were on the right track to the finish Eoin made a bid for freedom and neither my legs nor my lungs could catch him and inform him he'd taken the wrong turn. Myself and Kai abandoned him and stuck together to the finish where we had a slow sprint to figure who'd be DFL, little knowing it would take Eoin anothe 15 minutes to make it to the finish! a great night topped off by a large drinking session in the appropriately named, Bar Paradiso!

A group ride led us to a plaza where we hung out riding in circles and falling off our bikes until the police told us to piss off, so we found another plaza and out came the polo mallets. Unfortunately most of us were too drunk to ride in a straight line let alone play polo, so the games weren't of the highest quality. The rest of this night is a bit of a blur for me... I know that it is for most others as well... 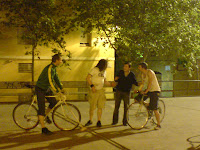 Saturday began with hangovers and moved swiftly on to hill-climbs. We had a group ride up to Montjuic, past the old Olympic Stadium. Some really amazing views of the harbour and the city from up there, but you are made to work for those views. After a brief respite a bunch rode back down the hill for an uphill sprint. Those who thought the sprints in Dublin weren't correctly named should have seen this. The race started on a stupid gradient and just got steeper. It wasn't the longest, but there was no respite until just before the finish. My legs went after about 10 metres, but Chris did quite well and finished with the main group. Respect. James from San Fran/London won the day. 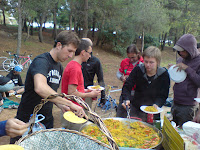 Waiting at the finish was a massive paella which kept everyone fed while we chilled out on the grass. Later that evening we had the main alleycat, a multiple manifest race with a 1.5 hour time limit. Myself and Chris weren't in the mood for competition so we decided to pair up and enjoy the race. It was really well thought out and so having two heads paid off as we didn't allow each other to make any mistakes. we had promised ourselves a beer after each manifest but we were having a blast after the first one so we just kept going. Three manifest later and we were doing pretty well. Stopped by the police once for screaming at a moped and missing a checkpoint by a few blocks were the only things holding us back, but as we got to the manifest change we realised we'd had our fun and didn't want to push it with another manifest. No matter how much Mahrou tried to persuade us we just weren't going to move again. Out with the beers and congratulations on a job well done.

Winner was Scott from the USA who's lived in Barca for a couple of years, and first out of towner went to Pascal from Zurich, riding with a 650 front wheel and popping barspins all weekend, much to my delight. We cruised to a new bar after the race, 'The Black Sheep', a huge barn of a place serving painfully cheap shots and pitchers of beer. Eoin crashed on the way to the bar, went to the hospital, ran out after 4 stitches and met us in the bar a short while later, legend.
A great night was had by all as this was the last night of competition, all we had to look forward to was relaxing. 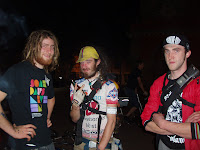 Sunday saw us at the beach for the prize-giving. A sweet afternoon, where the deserving took their bows and went away with their winnings, including 'cutest couple' to myself and Chris for the previous nights alleycat effort. Lots of cava was drunk and as the sun started to go down we made our way to a great tapas bar to get our eat on, as they say... People started to leave at this point, trains to catch etc. so the evening turned a bit melancholic, but enough beers soon solved that and the few remaining trotted off to a rum bar to drink mojitos for the rest of the night. 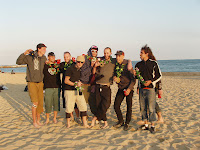 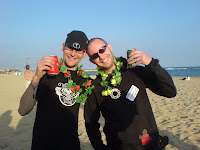 It was tough saying goodbye to everyone, you spend a whole weekend hanging out with the same group of people all day long and even though you may not have known them before, whatever you've been through together as a group during that time kinda binds you together. It's a great feeling, but it always makes going home that little bit harder. 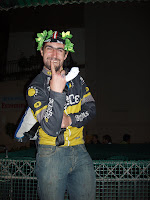 I would urge anyone who gets the chance to go to one of these smaller events. The CMWC's are amazing experiences but it's events like Paradise Weekend and our own Paddy's Day Massacre where you actually get to know people, and get to know the cities they work in.

To see the complete and unedited weekend go here.
Posted by Dublin Messengers at 8:13 PM