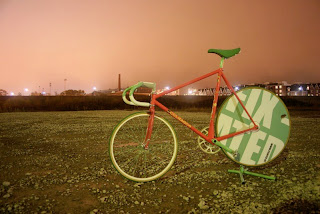 Led by talented young Irish designer Eoin Murphy (a resident of Toronto since 2006) in conjunction with Jan Buco of 'High Park Cycle' fame, 'Fixated' have created a custom bicycle to mark the arrival of the Bicycle Film Festival. 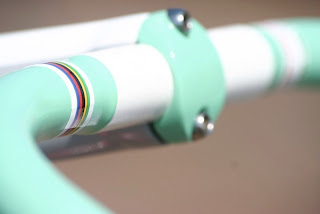 Based in Toronto, 'Fixated' is an international collective of designers, artists, and skilled fabricators. Drawing from both European and North American design ideologies 'Fixated' are a very exciting group who take a fresh approach to the modern aesthetic and subsequently occupy a unique position in their field. 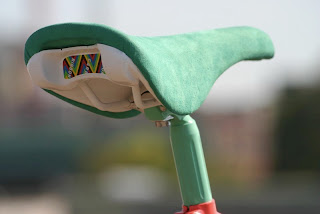 High Park Cycles have been in business in Toronto for over 35 years and is one of the most successful and celebrated independent bicycle stores in the country. In addition to the day to day business of the trade, ‘High Park’ has been actively involved in the world of competitive cycling and has produced 17 provincial and 4 national champions to date. 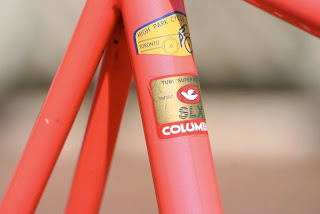 Subsequently this collaboration combines an electrifying blend of modern design and classic engineering.

The Bike.
The bicycle is a fixed gear pursuit bike which, in homage to those classic engineering principles, is built on a 1980's Colnago pursuit frame. The frame itself is an outstanding example of traditional building practices. Constructed from Columbus SLX steel tubing (no longer in production and not to be confused with modern aluminum SLX tube-sets) and is designed for flat-out pace. This total commitment to speed was mirrored in the design and build process by eliminating all but the most essential components leaving only one gear and no room for a freewheel or brakes. The bicycle demands the rider’s full concentration, controlling acceleration and deceleration using sheer force of muscle power. 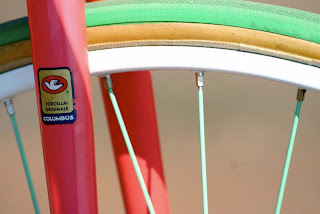 Although fixed gear road bikes are fast becoming a fixture of modern metropolitan society they have long held an iconic status among a number of urban sub-cultures. Appropriately the aesthetic for this project has its roots in one such social sector; the bicycle courier community. Here the philosophy is simple, "less is more”. 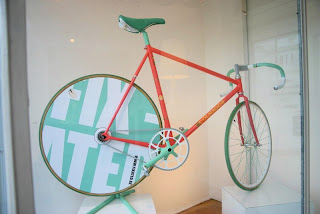 Beyond design, engineering, aesthetics and fashion the piece is a fascinating commentary on society’s dependence on and union with modern technology.
eoin.murphy@mac.com 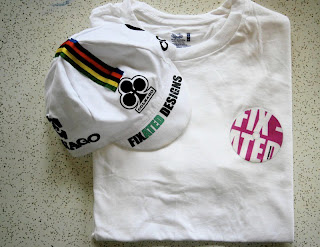 Taken from hkfixed.com
Posted by Dublin Messengers at 11:33 AM

whats the story dublin.. i was informed that you posted the fixated bike, hope you like it.

its a wild piece of machinery that needs to be seen, its been featured in a couple of galleries over here in toronto, we also have the look ma no brakes thing coming up which i am excited to see.. i can send you some pictures of the opening if you want..

any way nice one lads,

Hey Eoin,
thanks for finding us! People love the bike. Not sure how practical it is, but damn is it a piece of art!
What's your input in the 'look ma no brakes' thing? Looks interesting, and would be great to get some pics from it, or anything else you might have of interest.