Dublin Messenger: I figured since for 2 years it's been me, it may as well stay me, so from now in it's Dublin Messenger, not Messengers... as that would imply some sort of co-operation, and it being overtly just me frees me up to talk about shit I want to talk about with no inference that I am speaking for a group of people.

I was in Barcelona at the end of August for another edition of Paradise Weekend, hosted by the ever smiling Dave of Imensajeros. It's a great city to ride your bike in, and combine that with sun, sea and cheap food and booze, and it's a recipe for a fantastic time. Turnout was pretty low this year, for out-of-towners at least, but it was good to see more locals taking part.

The Saturday night alleycat is always my favourite part of the weekend, a proper pick-up drop-off, multiple manifest alleycat. I generally don't take it too seriously and I guess that's my way of enjoying it; stopping at checkpoints for a chat and a beer.

There were a few people writing an article about the race and I managed to do Dublin proud in it if I do say so myself... I guess it's a different attitude over there, as people were genuinely bemused to see me roll up to a checkpoint with a can of beer in my hand! 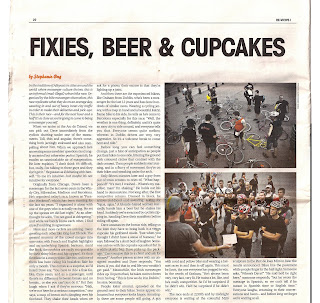 There's a new forum in town... dedicated to the fixed-gear fanatics in Dublin: Dublin Fixed Gear Agus Singlespeed, although I think the singlespeed is there just for forms sake, they're a really decent bunch of people, no snobbery, and so far no Boards-like behaviour.

A nice gallery of Britain's crap cycle lanes in the Guardian this week.

Aly has come out with another short video, this time featuring Kropa and his backwards cycling shenanigans.
It's only available on Arsebook at the minute but as soon as he puts it on YouTube I'll pop it up here.

Nice article on BBC about small courier firms in the UK benefiting from the threat of Royal Mail strikes. (Via Joe Hendry)

Also from Joe, news that a new movie C.O.D, is in the works, about a New York Messenger forced to deliver bombs... hmmm. One reviewer states nicely:
"Everybody hates bike messengers. First of all, the profession attracts douchebags. Second of all, they're a hazard on the road to drivers and pedestrians alike. Third of all, they always smell."
Nice...

It's still raining.
Posted by messedup at 10:26 PM

Ha ha, it means there has been no sniping or mean spirited comments from people hiding behind computers...

Sniping and mean spirit comments? That's hardly been my experience of that forum. Care to elaborate?

And people are hardly hiding behind computers, since you can go and meet half the regulars on any Saturday morning.

While most of the Boards.ie cycling forum is quite genial, and I'm sure most people on it are lovely, I have found a few times I have dipped into it people being short-tempered and well, downright dickish... maybe I've only been looking at threads where trolls have invaded, seemingly every argument about cycling law/helmets/cars end up in some sort of slagging match... so I choose to avoid it as much as possible, as it ends up frustrating and irritating me. That is purely my personal opinion on my personal blog. My experience on the Dublinfgss board has been exemplary, maybe there are certain factors behind this and when the membership grows and the whole thing becomes more anonymous it will end up with a bunch of trolls inciting ire in regular users, time will tell.

Im off to the kitchen to grab a cup of TEA.