I saw a Pumpkin hat in the pound shop yesterday, so that can mean only one thing... Halloween is over 6 weeks away!

Aside from Paddy's Day Massacre, Halloween has always been one of our most successful events and hopefully this year will be no exception. There was a great turn out for last Fridays Tartancat and I think we can keep that going.

This year Halloween falls on a Friday, so that gives us a whole weekend to play with.
Friday night we'll have the traditional Halloween alleycat, prizes for best costume as always.
Here are some previous years efforts: 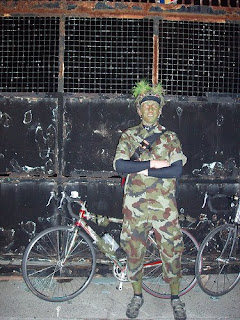 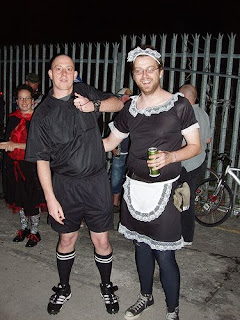 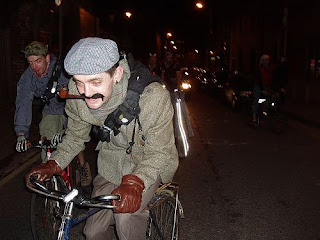 Details of Fridays race are still sketchy... as there is nothing organised yet. I've an idea for a race, but if anyone else wants to chip in please get in touch.

For Saturday I thought we'd take a trip back in time, to a more innocent age of messing... Anyone remember Courier Carnage from 2001??? It's basically a knockout sprint competition around a course using some of our most popular streets in the working day... it also bears a slight resemblance to the course we attempted to have for CMWC... I only just noticed that...
Anyway, this is a fun format, 3/4 rider heats running down to a 4 up final. 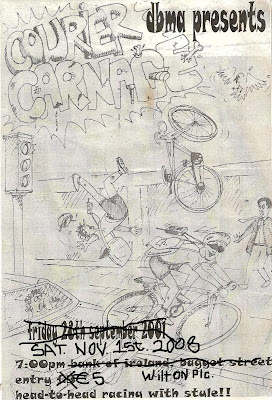 Hoping to book somewhere for parties on both nights, again anyone with any suggestions get in touch, about venues, dj'ing, whatever.
ALSO!!! Anyone with a logo design for posters, t-shirts, get in touch asap. As you can see from my MSPaint masterpiece above I'm a donkey when it comes to design. If you'd like to be immortalised let me know.

graham, i was talking to the lads in thinkbike (commuting solutions) and they gave me a few spoke cards to hand around for there halloween urban ride next wed (fancy dress) - not sure if i'll be around but could be a laugh and be good if we got a little crew to join ... so if you could plug this on yer page that would be great.
heres the link

sally by the way

Simply, admirable what you have done here. It is pleasing to look you express from the heart and your clarity on this significant content can be easily looked.