The dust has settled and my liver has stopped screaming. What a weekend. Europe knows how to party and damn do those Dutch know how to throw an event! Easily the best organised messenger event I've ever been to and that includes NYC 2005 with their oodles of dirty money!

It was a last minute decision for me to go, and I'm so glad I did. The largest travelling Irish contingent since New York made it feel like a home away from home, but seeing all those faces from around Europe descend on one place had me beaming all weekend. 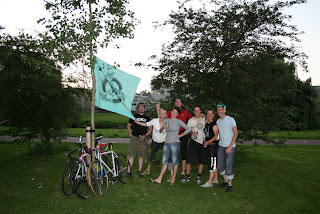 The main race and the majority of side events were held on the Technical University campus. Our campsite was within crawling distance of the course and we had toilets, 'prison-style' showers and running water all within reach. Hot, free breakfst in the mornings, good coffee, 1 euro beer... it brings a tear to my eye remembering it all.

Day one saw some polo action, Euro-style... which meant a much slower pace and better attitude than whatever that was in Toronto. This was a nice slow build up to the main event and provided people with plenty of time to catch up with old friends and begin the serious drinking. Basel won the polo I believe with London coming 2nd thanks to a DQ. Team Dublin 12 proudly grabbed 4th after DQ'ings. 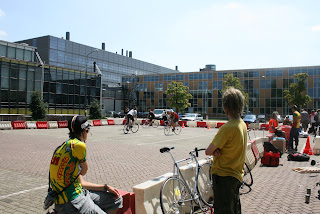 The welcome party was also held on the campus and the messengers really showed that they know how to drink. In fact the rest of this evening is a blur to me so I shall comment no further. All I know is that I was dancing on stage at one point, and then I woke up in my tent, if anyone can fill in the blank please email me.

Of course this didn't help when I dragged myself out of bed to find that the qualifiers were actually starting on time, and that if I keep picking 102 as my race number I will keep being in the first groups to qualify... A quick breakfast of scrambled eggs, ham and cheese, and a Bailey's iced coffee, and I was ready(ish) to race.

The course was a lot of fun, I really wish I had more time on it. It was pretty complicated, and you were punished for making mistakes, which I agree with, no turning around and going back the way you came like in Toronto. It really paid to stay calm and think ahead. The loop was pretty long, and to make up for holland's renowned flatness there were a few stair sections thrown in where you had to get off and run, again I think this added to the course. Everyone I saw racing looked like they were having a good time. I had a few calamities during my heat so I didn't qualify for the final, chief among these was my saddle coming loose right in front of Vincent who was MC'ing the event. It's quite distracting having someone with a microphone giving a running commentary on you trying to fix shit. Added to this were some sweaty birthday man-hugs from Flip at the stamp checkpoint and some guerilla water bombings by Pax, oh, not to forget my own ineptitude. I really didn't care though as I rode the whole thing with a huge grin on my face.

It was so nice after this to chill out in the amazing weather, have a few beers and watch the days events unfold. Semi-naked Scandinavian girls, aggresively drunk Glaswegians, skinsuit wearing Swiss... all part of a days entertainment. 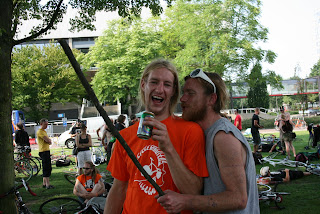 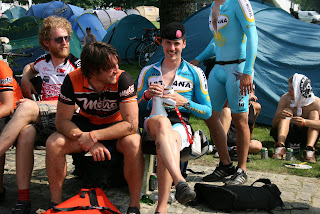 That evening the party and the roller racing moved to Area 51, a skatepark close to the campus. There were some games of footdown in the car park, and the the rain came. It didn't spoil anyone's fun though as we all piled inside for some live music and the Roller race finals. Chapeau to the Rollapoluza Crew for throwing a pro event. You can tell these guys know what they're doing and the whole evening ran without a hitch. A few more beers in the campsite later on and most of us settled in for the night to prepare for another days shenanigans. 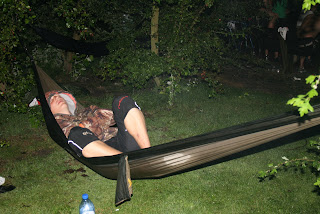 Sunday morning and the sun was back out again with a vengance making racing conditions incredibly tough. 3 hours of racing for everyone. no cut-offs or limited manifests. Jobs were worth money and the fattest wallet after 3 hours claimed victory. The strength of the organising shone through once again at this event. There was a laptop where everyone was hanging out that had live updates of the race... yes you read that right. As people made money it came up on the screen and you could watch the race unfold. I found out afterwards that this was actually on the internet, and a few guys in Dublin were follwing the race from there! Some achievement. 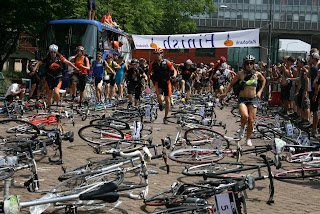 Just watching the racers was hard work, it was painfully hot, and 3 hours is a very long time when you can watch a clock ticking. Thankfully there was plenty of water to be had on the course, and a couple of hoses provided welcome relief at 2 points on the course. It was great watching racers srinting throught the start/finish area trying to grab plastic cups of water from volunteers... sometimes succeeding, sometimes howling in frustration as they knew it would be a few more minutes before they could get some much-needed refreshment. 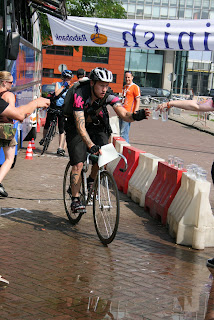 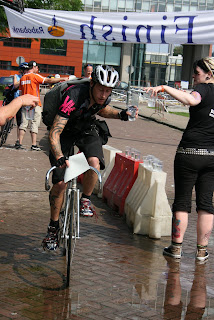 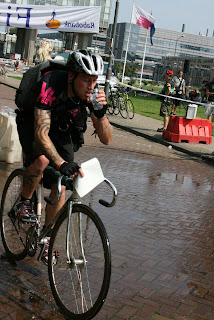 Chapeau to Austin from NYC for showing true spirit and doing the whole race with a plastic bag from the local supermarket to carry his packages! 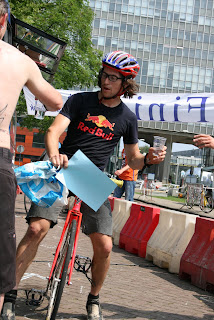 When it all boiled down Michael ‘michi’ Brinkmann and Astid ‘azkic’ Narud emerged as male and female champions respectively. Full results can be found here. 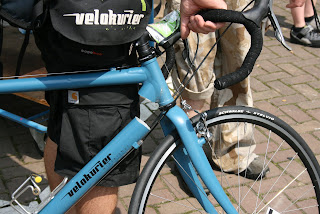 Side event finals took place after this, sprints, skids, trackstand, circles, the usual palaver. Great to watch. Sometimes when I see all the fixie stuff I am reminded of this Shakepeare quote:

"Life’s but a walking shadow, a poor player
That struts and frets his hour upon the stage,
And then is heard no more. It is a tale
Told by an idiot, full of sound and fury,
Signifying nothing. "

That's just me... it's probably 'cos I can barely trackstand... But in all seriousness it is quite a spectacle to watch Jumbo winning everything. The guy has so much control over his bike it's ridiculous. It was also nice to see some new talent coming along. Our own Daz had a really good showing, being narrowly beaten by Jumbo in both the skids and the backward circles(I think). He's going to be a force to be reckoned with in a couple of years... oh and he is also fast as fuck. 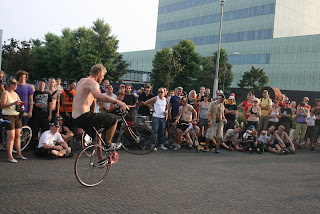 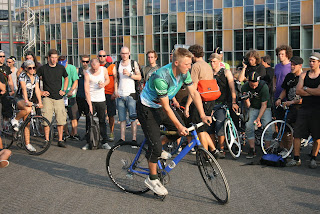 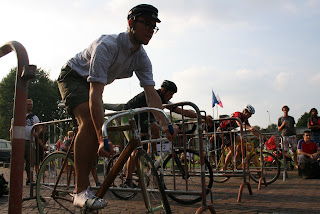 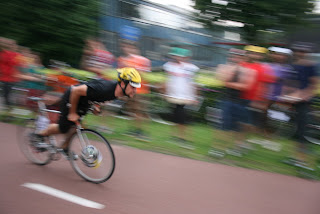 The final party was held on the campus, with the dulcet tones of Rik Van Den Bosch chilling everyone out after the awards ceremnoy. Not for long though as people proceeded to get wasted again. At some point the beer went from €1 to free... this prompted Pax from Copenhagen to start a beer fight, I gladly missed this and managed to stay relatively dry. A group of us struggled on into the wee hours, and when my head finally hit the sack the sun was coming up again. 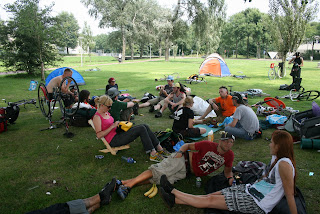 There is always a terrible comedown from these events, irrespective of how much narcotics you've consumed during it. Taking the tent down and watching the campsite dwindle was quite disheartening. Having to say goodbye to so many good people and maybe not see them again for another year can be a bit of a downer. But I guess that's one of the reasons these events will keep happening and hopefully keep getting stronger as this years event proved.

I said in my post about Toronto to remember that messengers aren't event organisers... I have most eloquently been forced to eat my words. the Dutch messengers have shown the rest of Europe, and indeed the rest of the world, that it is possible for a bunch of functioning alcoholics to throw a world class sporting event. My hat goes off to them for this and I'm already counting down the days to ECMC Berlin. The bar has been spectacularly and irrevocably raised.

More photos can be viewed here and here.
Posted by messedup at 2:20 PM

the photo of us at the flag must of been on thursday before the madness, as we look like a team of office heads at a paintball weekend.

when in fact i couldnt think of anything more opposite. More like an alcholic derailed train crashing into a fireworks factory....

who is that anonymous? You sound like you know us very well... great image...